The proof is in the pudding. Or in this case, the websites, the social media, the email, the direct mail, and the video. Take a look at the kind of work we do for our clients. They're they link between what you know and how you get revenue. Learn more

Who we are, what we do, and why you might want to spend a few minutes talking with us. Get the story

Marketing Ahead Of The Curve

A unique and intensive marketing partnership, for clients who want to forge ahead quickly. Limited to three clients per year. Find out more

Marketing for the 21st Century

Stuff You Need to Know: Because Neither Of Us Has Time To Waste On Nonsense

Getting to the heart of
ever-changing audiences

Marketing to consumers is a pretty big category. That's because "consumers" includes everyone who also falls under the category of "people". So you need to do two things. The first is to define which people you want
to talk to.

The second is to throw away your preconceived notions and figure out what's really important to them, today. Not when you started your company. Not two years ago. Now.

All successful consumer marketing addresses the same fundamental issues: Who are your customers? Where are they? What do they want to know? It's a matter of knowing which questions to ask, taking the time to ask them, and then acting on the answers. 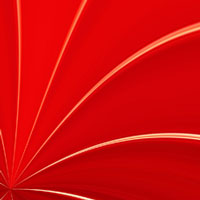 Companies are usually quite correct in identifying their primary target markets, but are often too narrow in their focus. Audiences and needs change constantly.

We help our clients take a fresh look at their target markets, refine their messages appropriately, choose the channels and media that make sense, and increase their sales as a result.

When we began working with Knowledge Points, their marketing was so much in lockstep with the rest of their industry that they used the same stock photo as two of their competitors.

Considering that KnowledgePoints' entire annual creative budget was less than what their largest competitor spent on online advertising in a single quarter, radical action was needed to help them stand out.

It meant taking a completely fresh look at KnowledgePoints' target consumers to create messaging, strategies, and tactics that helped KnowledgePoints stand out from its competitors.

We took a holistic approach to problems. In addition to making the ads do a better job of reflecting the needs of the target audiences, we wrote up pointers for the franchisees about how they could make their centers as welcoming to moms as the franchisees that did well in that area. We helped franchisees to look at their community demographic, and to understand that they could grow their business by doing a better job of reaching all families in their target market.

Before: A combination of homemade and generic creative did nothing to distinguish the brand from its competitors. In fact, it accidentally even used some of the same stock photos.

Before: A combination of homemade and generic creative did nothing to distinguish the brand from its competitors. In fact, it accidentally even used some of the same stock photos. 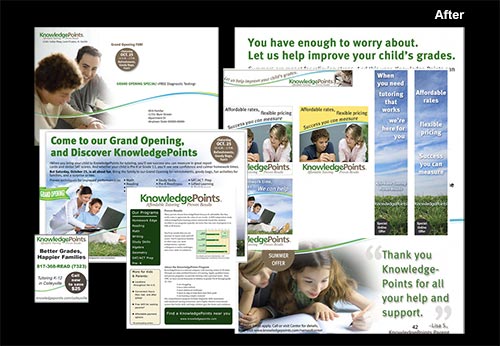 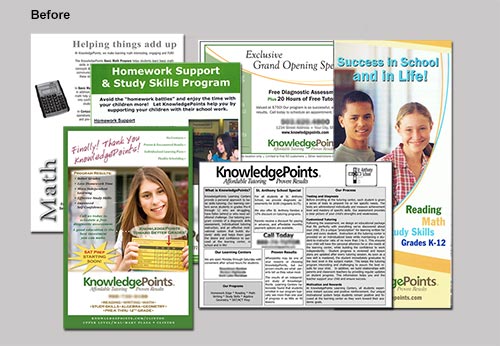 After: A fresh approach, better geared to the target consumers, offered flexibility and professionalism to franchisees. And it resonated better with parents.

What's important to know about our customers, besides their buying habits and basic demographic?

At C3 Advertising, we help our consumer clients to get quick answers to those questions from the data available, and help them find ways to improve their data gathering processes to continually get more, and better, intelligence from the marketing, sales, and customer support tasks they do every day.

Want to get more mileage from your marketing and advertising to consumers? Start here.